Jesus of Nazareth is hands down one of my favorite people ever. The basis of my initial moral compass, Jesus demanded from us that we help the “least of our brothers”.  That we help the poor, heal the sick, and sometimes defend women who have sex outside of marriage when they’re about to be killed by an angry mob. Essentially, Jesus required us to take upon his work and protect the most vulnerable as a means of reducing the suffering of one another. However, Ghana, a Christian majority country rated as the most religious in the world,  is also one of the most unequal and corrupt. How do both of these things co-exist? They co-exist through the use of religion for the domination of others. Because Ghanaian society is uncritically hyper-religious, many do not notice that a professed religious identity, as Christian or Muslim, does not necessarily translate into good moral behavior. Ironically, making morality interchangeable with having a religious identity allows the dehumanization of religious minorities and non-believers, while providing a safe haven for abusers. I seek a shift in perspective, where we as Ghanaians evaluate morality on the basis of how we treat each other, rather than whether we serve a God(ess) or which God(ess) we profess to serve.

British Colonization set the precedent for using a Christian identity to mask exploitation and abuse.

First, we are a post-colonial society. We cannot escape what happened to us, we cannot erase what occurred, and we would be foolish to ignore it’s disparaging impact. Our best bet is to identify the psychological, political, social, and economic impact of what occurred (and continues to occur) to incorporate it into our progression.

Second, this post does not seek to argue that Christianity is bad because it’s a colonial inheritance or because conversion was often coercive. It simply seeks to analyze how the manifestation of religion we inherited from our oppressors could not possibly be liberating. Those who sought to dominate us could not then turn around and teach us a concept of God(ess) that would actually free us or help us. Even if Christianity can manifest justly, the British version that we inherited could not be just. Because it was deeply embedded in a quest to subjugate Ghanaians.

Third, the way that the British subjugated Ghanaians, while maintaining moral superiority, socialized us to pay attention to religious identities rather than moral behavior. Basically the British were the first to use their religious identity as Christian to claim to be superior, while engaging in morally bankrupt behavior: stealing resources, trading enslaved people, and perpetuating the white supremacist belief that white people were superior. The Ghanaian ruling class have adopted this method of maintaining social order.

@skuboye you epitomize religious with no morality. You come online talking abt God but nothing you do is Godly. You're just abusive for RTs

The politics of having a socially acceptable religious identity often mask abuse. It allows people to be religious without morality. To go through the performances of worshiping God as a guise for morality, while treating other human beings terribly without remorse. It even allows for those within socially acceptable religious identities to abuse others while chastising those who do not adhere to their belief systems. Here is an example. 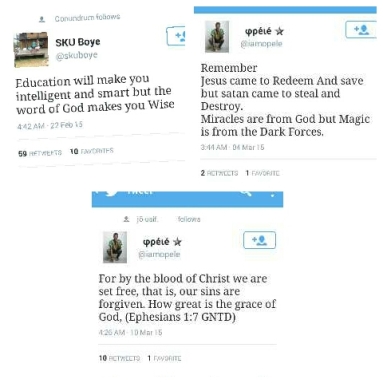 2. Dehumanization of others without the belief system, just like their colonial masters.

3. Pattern of Ill treatment of Others 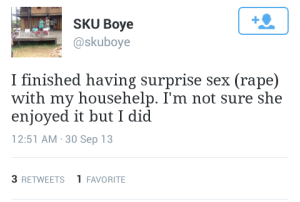 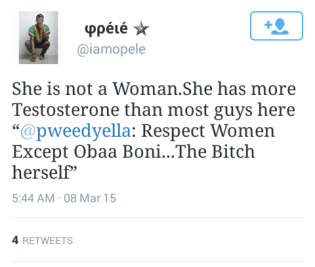 Because Ghanaian norms pay more attention to religious labels and performance than good moral character, abusers often hide behind religious labels to maintain appearances. There is a defacto assumption that those who profess socially acceptable religious identities are good people. Conversely, those who profess no religious identity or a socially unacceptable religious identity are viewed as morally bankrupt. Generally speaking, saying you’re a Christian in Ghana garners you an A+ moral perception. It is the gold standard. A Muslim is viewed morally with an A- stamp. While Muslims are generally accepted, Christians are still the center of normative morality. Lacking a religious identity or being an atheist, a D-, is frowned upon. But nothing brings about more anxiety, disgust, or hysteria than revealing that you practice indigenous African religions or Juju. A flat F.

The value judgments attached to these labels are problematic  because they are shallow and smack of colonialism with their devaluing of Indigenous belief systems. Moreover, presuming that a person has good or bad moral character simply because of their expressed religious identity (or lack off) obfuscates morality because it looks to identity politics rather than how people treat one another.

A shift in perspective would help. Understanding that religious identities do not necessarily produce good moral behavior may encourage us to look at how others treat people, rather than which entity they profess to worship.

3 thoughts on “Christian Without Christ: How Religious Identities Distort Morality In Ghana”