Let no man convince you that you will only be deserving of love after you have stifled your soul to cower under his big boot.  I mean this sincerely and earnestly when I say: you are beyond foolish if you sacrifice self-sufficient, dignified personhood for a dictator you will also call a husband. Many Ghanaian women, especially heterosexual women, are so afraid of being unmarried that they’re willing to trade in dignity for partnership. It is a major reason why women are anti-feminist: the fear that it will destroy their dating lives and their prospects of marriage. I cannot say that I blame them, after all marriage is so emphasized for women that unmarried women are treated as worthless. Even though women should not seek men’s validation, it is a widely circulated myth that women who become feminists are shunned collectively by men. Sure, sexist men find feminist women to be repulsive, but quality men dey. If a man is anti-gender equality, why would you want to partner up with him anyway? Why would anyone want to be with someone who does not understand that women are equal in dignity, social standing, intellectual capacities, value etc.?

It seems to me that what Ghanaian women desire is love. However, inherent within any loving relationship – that is worth keeping – is respect. Deep respect. Deep respect and love, cannot co-exist with sexist and domineering attitudes. Sexist and domineering attitudes are not reflective of quality men. We all deserve quality partners; the kinds who resist injustice and stand in defense of our personhood by supporting systematic gender equality, also known as Feminism.

Don’t Ever Be Discouraged From Struggling For Your Own Freedom

women are taught "don't be too great, too smart, too courageous, men will never love you". Dear women, fuck that shit pic.twitter.com/6JCYsQ5nXD

then Feminism is for you.

Contrary to popular belief, feminism is not a pre-determined set of ideas that all women must follow.

Feminism is a set of movements that seek to remove socially ingrained gendered constraints that often leave women powerless.

So why is Feminism so controversial?

Why are women punished severely for simply identifying as “feminist”. And why does anti-feminist rhetoric focus on attacking feminist women, rather than engaging feminist ideas?

Because feminism greatly threatens patriarchy’s placement of men at the top of the social hierarchy.

Anti-feminism often utilizes classic ad hominem fallacious attacks that seek to demonize feminist women, rather than engage in feminist discourse. These attacks – shaped by sexism – seek to make feminist women romantically undesirable as a means of discouraging other women from joining the movement.

The ad hominem attacks add an additional layer of dehumanization. Not only do sexists fail to aid in the eradication of oppression, they target those who do.

Fortunately, these targeted attacks fall short of stopping feminist women from continuing to advocate for our own freedom. Even though it gets unbearable at times, we remain committed to the cause: the eradication of institutional gender disenfranchisement. We may not always be strong, and we may not always be right, but we have good intentions, we are resilient, unstoppable, unmoldable, unsociable, and thus powerful. So don’t be afraid to stand up for yourself, or your fellow sisters. Afterall,  “We have nothing to lose but our chains.”

How Love Is Used To Dissuade Ghanaian Women From Being Feminist

I need to know who wrote this pic.twitter.com/gBU55V6v7a 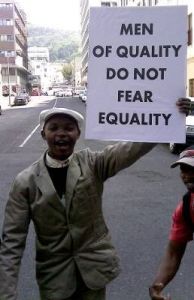 Feminism’s critiques are brilliantly sexist. They seek to devalue feminist women and tap into humanity’s deepest fears: loneliness. Women are threatened with the prospect of losing love, if we continue to challenge men for equal footing.

But the truth remains.

No man that respects your humanity will ever feel threatened by your quest to attain all the rights, privileges, and opportunities that you are denied because you are a woman, and that he is granted because he is a man.

Think carefully of the alternative.

Men who believe that men are "head of household" are more likely to beat their wives than men who believe n equality pic.twitter.com/l8BXZyYj6l

Are you willing to spend the rest of your life partnered with someone who is patriarchal and thus more likely to abuse you? A person who thinks they’re smarter than you? A person that believes that they can command you or demand sex from you? A person that is less likely to value your opinions because wo yɛ obaa? A person who believes they should occupy a superior position in the household simply because they were born a man? Are you willing to spend the rest of your life with someone who expects both of you to go to work, yet only you care for kids, clean the house, cook the food, do the dishes, iron the clothes etc.? A person who believes that their cheating is forgivable, and a function of being a man because of  fauxnogamy ?

Sexism does not just ruin our society, it ruins relationships, it ruins happiness, and it ruins love.

There is no reason to shy away from feminism because men won’t like it. Men of quality, support equality.

4 thoughts on “Stand Up For Yourself Girl, Men of Quality Support Gender Equality Anyway”