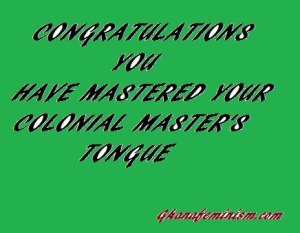 The need to feel superior to others is never ending. It manifests in many ways, but the worst manifestation has to be the self proclaimed grammar snob. Intelligent enough to memorize the rules of a dominant colonial language, self-proclaimed grammar snobs lack the vision to understand that lingual rules are arbitrary and often used as a means to demean and exclude those without access to status quo institutions. Grammar snobs in Ghana are a beautiful contradiction. They hate colonialism, yet embrace colonial means of determining worth.For them, those who are unable to memorize and utilize the arbitrary yet heavily enforced lingual rules of British colonial English deserve to be demeaned and mocked. It does not matter that language is supposed to be a means of communication, for Grammar snobs it is acceptable to refuse to recognize the content of someone’s message, and to focus instead on trivializing their message because they don’t write or speak English the way our beloved colonial masters instructed us to. Ayeeko.

The curse of being post-colonial is internalizing the means through which the British asserted power over us. For example, since the British insulted and theorized that our ancestors were inferior and immoral because they were not Christian, beaucoup Ghanaians now use Christianity as the only marker of morality. Chale, cultural imperialism irritating.

The means through which the British asserted dominance over us still remain. Except, through psychological chains, Ghanaians have replaced British bodies as the enforcers of colonial values.

So here we are, demeaning other Ghanaian people in the same ways the British demeaned our ancestors. They theorized us as backwards and intellectually inferior because of an inability to speak and write dominant forms of their language: English.

Dominant English is also known as “proper English”. I emphasize proper English because it is the form of English that powerful people use. With their power the ruling class have convinced us all that there is only one acceptable and respectable expression of the English language, and that those who deviate from this expression of English are stupid, and worthy of mockery.

Despite anti-colonial values, we are  insistent on continuing to reinforce hierarchies of language generated by cultural imperialism. Not only do we disrespect those without a good command of dominant English, we relegate Pidgin* to a language undeserving of marvel, while white languages are still heavily valued and protected. The ability to speak Fra fra, Hausa, Twi, Ewe, or Ga is taken for granted as those that can speak French, Spanish, or English are praised.

English As A Marker Of Social Capital

Ironically, elitism is often coupled with a hollow and a shallow world view. English, in its written or oral form reflects social capital. Even one’s accent communicates to people whether one “belongs” in certain spaces. Grammar snobs, with a shallow and hollow perspective of society,  often fail to recognize the social structures that shapes how one speaks and writes English.

If English expression was not classed, Ghanaians would not fake British and American accents to appear closer to dominant English.

So the question remains:

Is it okay to mock and demean people who have not mastered dominant forms of English? Especially since learning dominant English requires exposure, and access to instruction as exposure is classed.

Even worse, are we so shallow as to ignore the content of one’s message if its dressing is not in “proper English?”

No and no. Language is a means of human communication. And stigmatizing some people for not expressing their thoughts and beliefs in the standardized, uniform structure and method that is designated as “proper English” is elitist, classist, and embarrassing.

*Pidgin, a localized adaptation of English, infused with Ga, Twi, and other Ghanaian languages is not appreciated for its creativity and marvel. Instead Pidgin is relegated to an informal dialect of English used by “cool boys” (elite enough to know status quo English) and Ghanaians shut out of quality education systems. While “cool boys” use Pidgin to demonstrate how tough they are, Ghanaian women are restricted from using this revolutionary lingual deviation from standardized, colonial English, because we are women. It is thus considered unladylike for Ghanaian women to speak Pidgin.